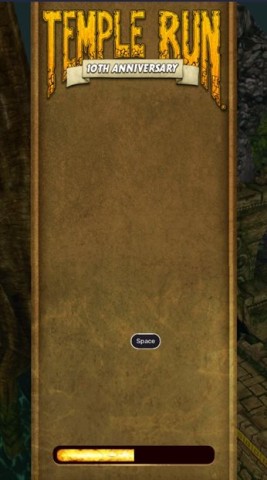 Temple Run APK is a wonderful online video game for Android users that was first released in 2011. It is a fun making game where you run non-stop to avoid obstacles to escape from the temple. This game is very popular millions of people download it to play it frequently to pass their free time.

The amazing matter is that Temple Run game is 100% free to install and play. You do not need to pay a single penny from your e-wallet. Besides, it is safe and secure for your devices. No harmful elements are available in this game such as viruses and malware.

In addition, the latest Temple Run updates regularly to fix unwanted bugs and bloatware. So, your devices do not lose the speed. Moreover, this game is legal for Android smartphone users. It never violates any legal procedures that create a hassle for game lovers.

So, you can install and enjoy the game for your convenience.

Guy Dangerous is the main character of the Temple Run game.

If you go on your game forward you get introduced to several other characters. But you need to use coins to add the characters of your gameplay. Other character names are - Scarlett Fox, Barry Bones, Karma Lee, Montana Smith, Francisco Montoya, and Zack Wonder.

Every character has different abilities and behavior. A character steals a relic from the temple. If you are in the ranking top 5% on the leaderboard challenge you must achieve Sir Montague characters. 3 types of coins are available such as gold, red, and blue.

A gold coin is considered 1 coin, Red is 2, and blue is 3 coins. Generally, the coin is used to power up characters and the game. Coin and characters can be collected using real money from your pocket. If players want to jump over the object’s screen needs to be swiped upwards.

If you want to slide you need to swipe downwards.

In short, Run Video Game is so entertaining. So, you can install Temple Run APK and play it.